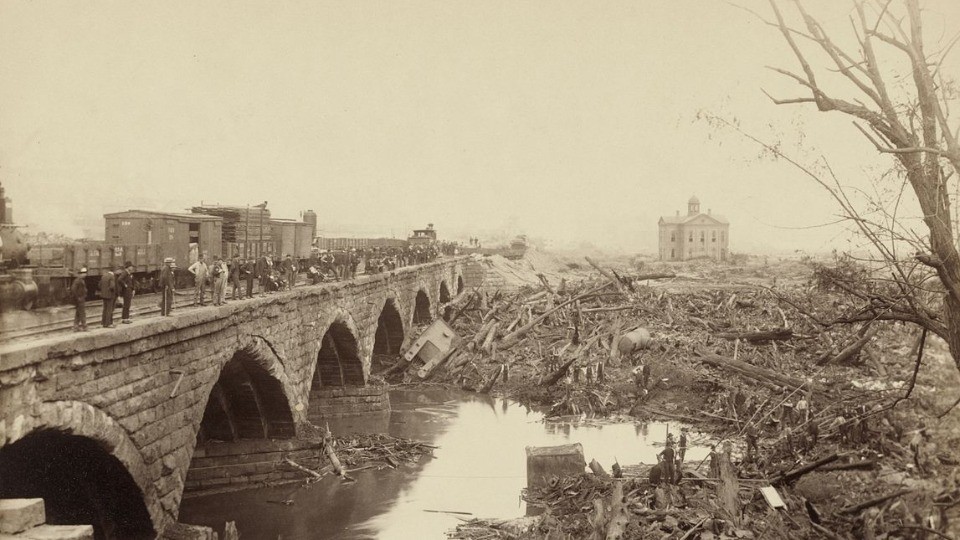 Ever wonder how people reacted to disasters before the federal government got involved? In 1889, Johnstown, Pennsylvania, had a massive flood that wiped out the town. Another, not quite so damaging flood struck Dayton, Ohio, in 1913. In 2005, Hurricane Katrina hit the U.S. Gulf coast, causing levees to break in New Orleans, causing massive flooding there. In two of those cases the state government did almost nothing, and the federal government was entirely missing.

Ever wonder how people reacted to disasters before the federal government got involved? In 1889, Johnstown, Pennsylvania, had a massive flood that wiped out the town. Another, not quite so damaging flood struck Dayton, Ohio, in 1913. In 2005, Hurricane Katrina hit the U.S. Gulf coast, causing levees to break in New Orleans, causing massive flooding there. In two of those cases the state government did almost nothing, and the federal government was entirely missing. In one, primarily the city looked to the federal government to provide assistance. Of the three, only in the last case did the relief effort itself turn into a disaster. Indeed, in the Dayton flood, federal assistance was outright rejected, and by the time the state of Ohio could act, Dayton had handled its own disaster privately. This will be a three part series in which I look at each of these floods.

Johnstown was a typical Pennsylvania steel town. When the exceptionally heavy rains came in 1899, the South Fork Dam, some 14 miles away, collapsed. It unleashed some 20 million tons of water down a valley leading straight to Johnstown, killing more than 2,200 people and causing $17 million (then year dollars) in damages. Prior to the terrorists 9/11 attacks on the World Trade Center and the Pentagon, it was the worst loss of life in a single incident in American history. The floodwaters raced through the city, dragging wire and steel from the nearby plant, trapping anyone caught in the torrent against fallen trees. The flood also destroyed the railroad, making relief difficult. Altogether, over 27,000 people were homeless or otherwise needed care.

Where was Uncle Sam? Not needed. When the floodwaters receded by June 1—the flood hit at 3:00 pm the previous day—citizens had already started to pour into town to offer assistance. Those on the hillsides who had been spared brought food, water, and clothing. Milk stations were set up. Less than three hours after the first local citizens started to provide aid, every surviving male reported to the Adams Street schoolhouse, voted to elect a “dictator” whose instructions all would follow (Arthur Moxham), and then the men organized themselves into committees to begin the clean up.

They removed dead bodies, cleared away debris, burned animal carcasses. Seventy-five men were appointed “deputies” with tin stars cut from tomato cans. They threw up a cordon around the town’s banks and began to recover and account for all cash. Despite the fact that almost all of the rescuers themselves had lost someone, they all pitched in. Commandeering every intact structure, Moxham’s men erected tents for the relief arriving from nearby towns. People made controlled fires for purifying water, cooking, and sterilizing medical instruments. They transported bodies across the river to Prospect Hill, where they dug shallow graves—“holing the dead” as it was called.

Although the flood had cut the Pennsylvania Railroad at Sang Hollow depot, rescuers unloaded boxcars of food, blankets, clothes, and medicine by hand, then moved it upriver over rock falls and landslides, on their backs. They transported two full trainloads by June 2, then erected a rope bridge across the Conemaugh River. By June 2, the railroad had restored connections from Sang Hollow, and the first train actually left by nightfall on June 1. Men stood in the open doors of boxcars, tossing out tins of crackers and cheese to the hungry who lined the tracks. From 60 miles away, Pennsylvanians marched in to help their neighbors, all without a single government bureaucrat’s help. In a call to arms at City Hall, Robert Pitcairn addressed the crowd that gathered saying that “the living need immediate help.” In less than an hour, two men at the front of the hall collected $48,000 in relief funds—a staggering amount in the late 1800s. In Pittsburgh, officials dispatched wagons to go through the city collecting blankets, clothing, and tools, deposited them at Union Station, then went back out. Thousands of relief workers arrived from out of state, including 50 undertakers.

The first Pennsylvania state official didn’t even arrive until Saturday afternoon, and he merely observed in awe as the local Johnstowners went about their difficult business. When the Pennsylvania National Guard finally arrived, Moxham sent them home. Only after two days did the city council draft a formal request for help from the state. Yet other assistance continued to pour in, including Clara Barton, later known for her role in the the American Red Cross. “Captain” Bill Jones of Carnegie Steel personally brought 300 steelmen from Pittsburgh and then paid out of his own pocket to stock an entire relief train. He worked in Johnstown for four straight days, then, just as Barton showed up, went home and collapsed.

By June 6 thousands of pounds of coffee, ham, cornmeal, soap, canned goods, cheese, candles, and biscuits poured into Johnstown, unloaded by the hour by thousands of volunteers. Cincinnati meat packers shipped 20,000 pounds of ham. Over 7,000 pairs of shoes arrived; enough tools arrived that no worker should ever sit idle; and then there was the money . . .

Pittsburgh raised $100,000 in a week, Philadelphia sent $600,000, Boston sent $150,000, and even Tiffany’s and Macy’s in New York City send money. Donors were listed from Tombstone, Arizona to the Hebrew Benevolent Society of Los Angeles. President Benjamin Harrison contributed $300 of his own money—no small sum at the time—and his appeal at the Willard Hotel raised another $10,000. Irish cities of Dublin and Belfast kicked in funds, and German donations exceeded $30,000. Half of all Philadelphia churches organized relief wagons.

Indeed, it wasn’t until more than 7,000 outsiders had arrived to help that Moxham requested the state of Ohio to finally send troops to keep order . . . among the new arrivals. By that time, private philanthropy, charitable relief, and local initiative had handled the situation admirably. As one observer said, “Things were exceptionally well organized.” So ends part one of our three-part study.

You need anVIP Membershipto get access to A Tale of Three Floods: Part 1, Johnstown

to access
A Tale of Three Floods: Part 1, Johnstown

to access
A Tale of Three Floods: Part 1, Johnstown

We have emailed instructions to access A Tale of Three Floods: Part 1, Johnstown to . Make sure the email arrives in your inbox: either add "support@wildworldofhistory.com" as a safe sender to your email platform, or if you use Gmail, drag our email into your Primary tab.