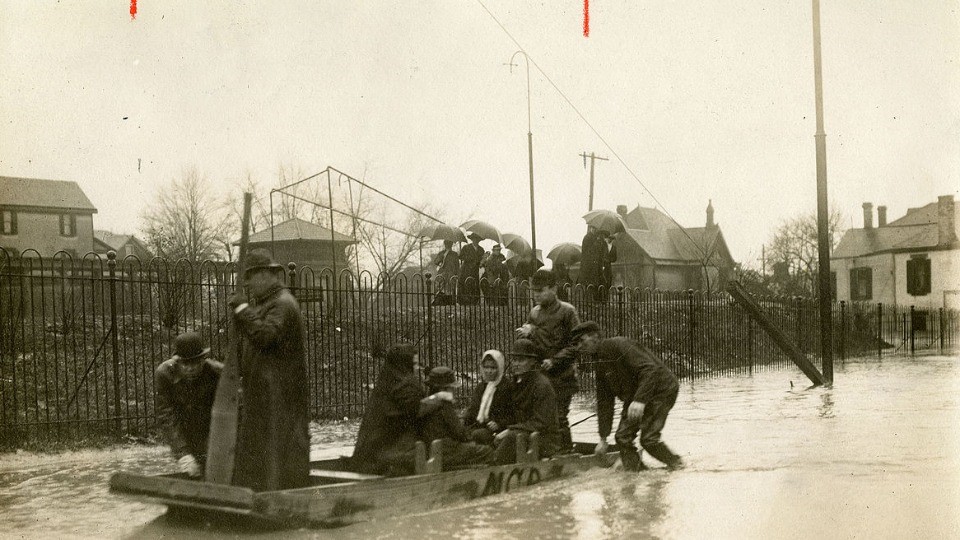 Last time we looked at the Johnstown Flood of 1889. Just over 20 years later, Dayton, Ohio suffered a catastrophic flood of its own. After 48 hours of consistently heavy March rains, the Miami River began to rise. On the Tuesday after Easter, March 25, the Mad River levee broke and flood waters surged over the banks of the Mad River. Dayton was covered by five feet of water.

Last time we looked at the Johnstown Flood of 1889. Just over 20 years later, Dayton, Ohio suffered a catastrophic flood of its own. After 48 hours of consistently heavy March rains, the Miami River began to rise. On the Tuesday after Easter, March 25, the Mad River levee broke and flood waters surged over the banks of the Mad River. Dayton was covered by five feet of water.

Fortunately, the deluge struck before businesses and schools were opened, but the water, speeding in at 40 miles per hour, slammed into the residential areas, reaching depths of 14 feet in some areas. Other levees, now compromised, also failed including the one in the town of Hamilton. Fires started, leaving those trapped on rooftops with the option of burning to death or risking the deadly floodwaters. By nightfall, some 300 Daytonians were homeless. Yet the death toll was remarkably low, mostly due to the efforts of the city’s business community, especially John H. Patterson, the head of National Cash Register (NCR). By the time Governor James Cox (later presidential candidate) James Cox placed the city under martial law on March 27, Patterson had already organized the relief, taking command over elected leaders such as Mayor Edward Phillips.

Part of the problem was that City Hall was under water! Patterson turned his business machines company into a rowboat manufacturing company overnight. An army of builders turned out a rowboat ever five minutes, and NCR employees leaped in, paddling around the city to rescue stranded people. Three days after the flood started, NCR had turned out 276 flat-bottomed boats and delivered them to flooded districts. They were assisted by another 150 private boat owners who had already started rescue efforts. Two individuals, J. Bob Fries and Fred Nitzel were credited with rescuing 135 persons. Each of Patterson’s NCR boats could carry six people plus the rower. NCR’s Fred Oates personally used his boat to bring in ten or more people before concluding his district was safe. They he began delivering food to people stranded on high ground.

NCR headquarters was turned into a housing and medical station. An entire floor was converted into a dining room, complete with waitresses in uniforms (also NCR employees). NCR’s commissary served 2,700 meals a day , and every single NCR employee was tasked with some emergency work. Patterson cleared office space, hired musicians to cheer up the refugees in the building, and the company as a whole paid for an entire relief train stocked with medicine, and then funded another, then another. NCR’s security force became private police in the absence of any official police presence. NCR’s tent city had electric lights, sewer lines, flush toilets, and sowers. Motorcyclists and boaters patrolled the city to prevent looters. Committee members inspected every grocery, bakery, restaurant and school and disinfected them. A publication called the Outlook reported that “No novelist or playwright . . . ever devised anything more ingeniously dramatic—this heroic use of efficiency.”

Other Daytonians pitched in, of course. Residents of North Dayton, Riverdale, and Dayton View all commenced their own relief efforts. Both NCR and R. H. Grant who oversaw the official relief effort. When he took over on March 30, he found a superbly organized effort with districts delineated on a map, and churches and schools used as relief stations. The Dayton Bicycle Club removed 2,000 dead horses and other small animals using 150 trucks.

Nearby communities delivered bread, ham, eggs, butter, cheese, milk and canoes. Towns such as Troy, Greenville, Tippecanoe, and other communities formed relief committees, with NCR acting as the clearinghouse. Other suburbs—Oakwood, Lebanon, Xenia, and others took in homeless families. The Pennsylvania Railroad brought in all loads free of charge. The historian of the Dayton Flood, Judith Sealander concluded that “Business planning, not luck” saved the city from epidemic. (She could have added, “not government efforts”). Except for a single political appointee, every member of the Citizen’s Relief Committee was a businessman. The Relief Committee reviewed requests for loans, and provided bridge loans until the banks could reopen.

During the Dayton Flood, Patterson paid the full salary of seven thousand NCR employees for a period of two weeks while the company did absolutely no actual business. All of this was done when the Ohio and Dayton tax laws did not provide any deductions for any charitable donations. And as soon as the floodwaters receded, the same businessmen joined to develop the Miami Conservancy District to prevent the next flood. Once again, they ignored the federal and state governments. Raising their own financing ($2 million a month), ultimately creating a fund that could handle flood waters double the level of the 1913 flood. Sure enough, in 1937, a flood of nearly equal magnitude struck the Miami Valley and was easily controlled. For a second time in less than 25 years, a major disaster was overcome by private philanthropy alone, with government playing almost no role at all.

You need anVIP Membershipto get access to A Tale of Three Floods: Part II, Dayton, Ohio

We have emailed instructions to access A Tale of Three Floods: Part II, Dayton, Ohio to . Make sure the email arrives in your inbox: either add "support@wildworldofhistory.com" as a safe sender to your email platform, or if you use Gmail, drag our email into your Primary tab.