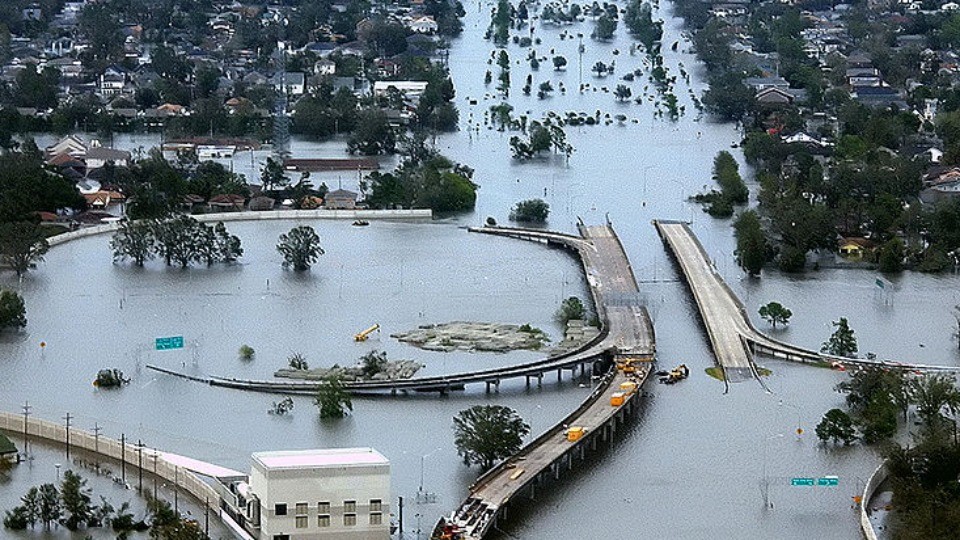 We have seen in the cases of Johnstown, Pennsylvania and Dayton, Ohio that the citizens of those and surrounding towns dealt with massive floods without relying on government support or relief at all. Indeed, in both cases, they refused help from the state until after the locals had the situation well under control.

We have seen in the cases of Johnstown, Pennsylvania and Dayton, Ohio that the citizens of those and surrounding towns dealt with massive floods without relying on government support or relief at all. Indeed, in both cases, they refused help from the state until after the locals had the situation well under control.

A much different scenario unfolded in 2005 when Hurricane Katrina struck the American Gulf Coast. Estimated to be a Category 5 hurricane with winds in excess of 155 miles per hour. It flattened beach houses and residences within five to ten miles of the shoreline, then smashed into New Orleans. Katrina put such stresses on the waterways that the levees failed. Over 1,800 people died form either debris or drowning. In historical context, this was nowhere near the death toll from other hurricanes: Calcutta in World War II lost 35,000 to a storm; the Galveston hurricane in 1900 killed four to five times as many as Katrina—but because Katrina occurred during the 24-hour news cycle and was highly politicized by the Democrats, Katrina was different.

Katrina’s legacy is that of utter incompetence on the part of government at all levels—local, state, and national. New Orleans in fact had a “Comprehensive Emergency Management Plan” which outlined evacuation procedures. It recommended “long range planning” that was never implemented by the then-mayor Ray Nagin. Not only did the city follow “virtually no aspect of its own emergency management plan,” but New Orleans also “failed to implement most federal guidelines.” When the Federal Emergency Relief Administration tasked the mayor’s office with coordinating the use of school buses and drivers to support evacuation of 100,000 citizens, Mayor Nagin made no such effort. Indeed, Nagin didn’t even order evacuation with the storm bearing down on New Orleans. By the time he finally made an evacuation announcement, all he could say to tourists was that he hoped “they have a hotel room and it’s at least on the third floor up.” Yet on August 28, the National Weather Service issued an advisory that said “DEVASTATING DAMAGE EXPECTED. . . HURRICANE WITH UNPRECEDENTED STRENGTH . . . MOST OF THE AREA WILL BE UNINHABITALBLE FOR WEEKS.”

President George W. Bush followed up with a disaster warning before the hurricane reached landfall.

With such a warning, you’d have thought everyone would be prepared. Governor Kathleen Blanco, while requesting that the President declare an emergency on Saturday, did not request any specific transportation or rescue boats in advance of the storm. Her nonchalance contributed to the assessment by those in Washington that she had the matter under control.  Meanwhile, Nagin did not employ any of the hundreds of city school buses or public buses of any kind. The Regional Trade Authority had 360 buses, each capable of holding 60 people, meaning they could have evacuated up to 20,000 people per trip and in less than 12 hours could have evacuated virtually all of central New Orleans. Amtrak offered hundreds of empty seats to Nagin who declined. One former mayor said of Nagin, “he was the disaster.”

By the time FEMA was called in the streets wee flooded and it was too late for buses to have any impact. About 100,000 residents remained in the center, but 200 New Orleans Police had already left. Under other circumstances, perhaps FEMA’s efforts would have been sufficient. Helicopter rescue missions began four hours after the hurricane made land. Government helicopters dropped 3,000-lb sandbags to save the levees and an hour after Blanco issued the order to evacuate the Superdome, FEMA had 1,100 trucks ready to get people out (while city buses sat idle). But even though FEMA had prepositioned millions of tons of ice, “meals ready to eat” (MREs), and millions of gallons of water, it took five days for FEMA trailers to actually role toward New Orleans, and even then, a local New Orleans Fire Department contact re-routed the convoy to Metarie, not the Superdome. By the time the Louisiana National Guard showed up at the Superdome, some 8,000 people had been cooped up for four days, “a community of beggars, crowding the sports arena as the Hebrew cripples at the pool at Bethesda. . . . Hallways and corridors were used as toilets . . . .”

Ultimately, the performance of FEMA was so bad that Sheriff Jack Stephens of St. Bernard Parish was asked how to improve it, and responded, “I would abolish it. I’d blow up FEMA . . . .” Even before the flood, when the U.S. government was trying to bolster the levees, dozens of trucks had to travel in a long convoy to a distant supply source because they ignored a local supply source. In retrospect, FEMA was “disorganized, unprepared, and grossly late in arriving.”

The contrast between the relief of Johnstown and Dayton on the one hand, and New Orleans on the other, is a cautionary tale of shuffling off onto government the things individuals should be doing for themselves. We need more John Pattersons and far fewer Kathleen Blancos and Ray Nagins.

You need anVIP Membershipto get access to A Tale of Three Floods, Part III: New Orleans

We have emailed instructions to access A Tale of Three Floods, Part III: New Orleans to . Make sure the email arrives in your inbox: either add "support@wildworldofhistory.com" as a safe sender to your email platform, or if you use Gmail, drag our email into your Primary tab.