This course follows American History Part 1 and picks up after Reconstruction and traces American expansion to the world stage right up until today!

As with all of our courses you get: 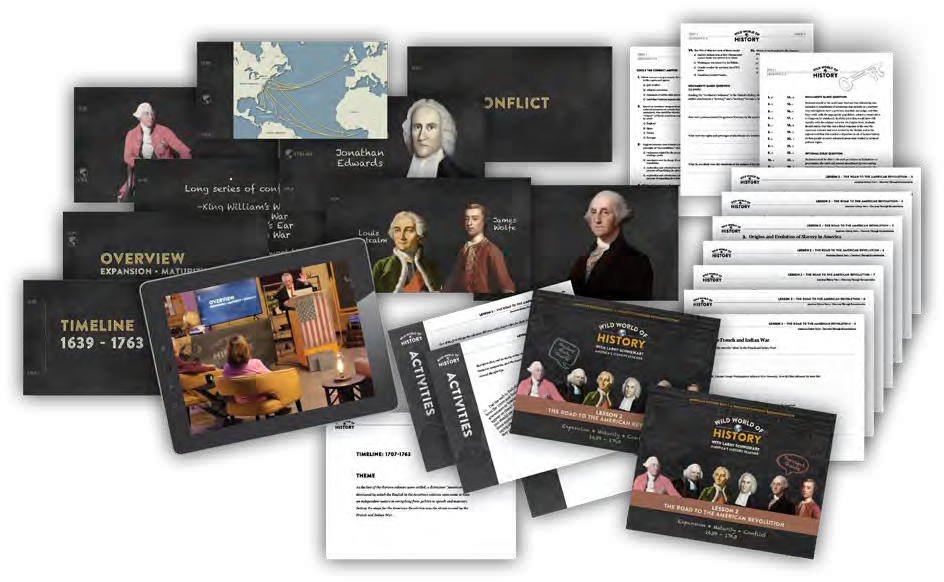 This course begins with the rise of a powerful United States as built through expansion across the continent, the excellence of American industry, and the ascent of the U.S. to the international stage in the Spanish-American War.

With the rise of the Progressives, America saw the implementation of the income tax and Prohibition, and entered World War I under Woodrow Wilson. The post-war era saw a booming economy, followed by the Great Crash and the Great Depression.

Government errors and poor policy turned a cyclical recession into the Great Depression, and Franklin Roosevelt’s administration had not substantially changed the economy for the better after eight years.

In the ensuing Cold War, the U.S. shouldered the burden of freedom for much of the world, while in the process losing its international economic dominance.

Through a combination of social policy, demography, and ideological subversion, the 1960s era was a time of unraveling, culminating in the “malaise” of the1970s.

The rise of Islamic terrorism, played down in the 1990s, returned with a vengeance on 9/11 leading to foreign interventions in Afghanistan and Iraq, but at the cost of American prestige and treasure.

With the election of Barack Obama in 2008, many Americans hoped they had finally put racism to bed, but in fact social tensions got worse as the economy went into a tailspin and a financial crisis struck.

The sinking state of the American economy and the threat of illegal immigration led to the election of Donald Trump in 2016.

You may download a .ZIP file with all materials using https://go.wildworldofhistory.com/american-history-part-2-comprehensive-download

For a limited time the American History Bundle is available for only $149 while Professor Larry is out on the road promoting this new course (normally $399).

You also get another bonus! FREE VIP Membership for 12 months. That's an additional $69 value.

We have emailed instructions to access American History - Part 2 (Reconstruction Through Modern Era) to . Make sure the email arrives in your inbox: either add "support@wildworldofhistory.com" as a safe sender to your email platform, or if you use Gmail, drag our email into your Primary tab.