How Wrong Can You Be? 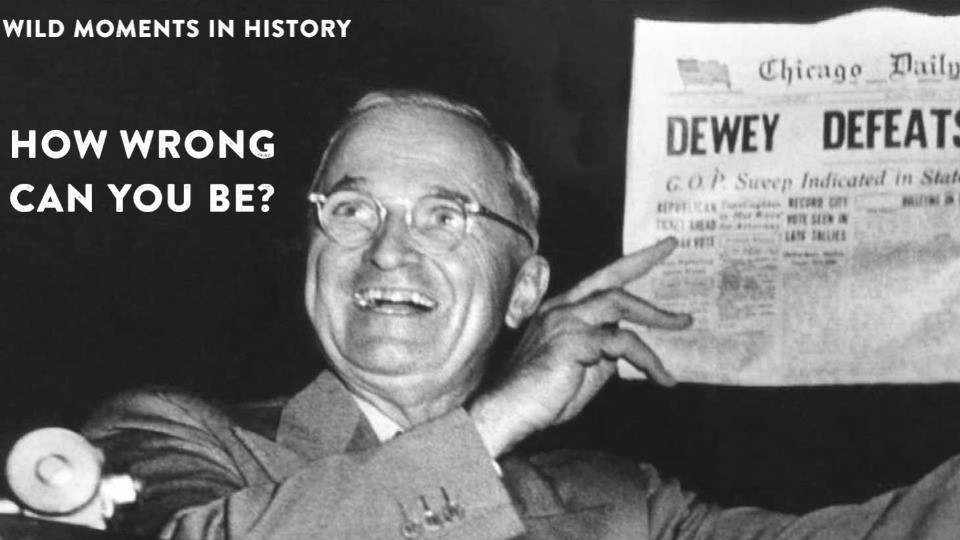 How Wrong Can You Be?
Wild Moment in History

We’ve all seen the photo of the newspaper headline “Dewey Defeats Truman”—which of course was wrong and, suffice it to say, a tad premature. But who else has been wrong in their prophecies?

*Pierre Pachet, a professor of physiology at Toulouse University said in 1872, “Lewis Pasteur’s theory of germs is ridiculous fiction.”

*In the “thank God he was wrong” category, Sir John Ericksen, a British surgeon appointed Surgeon-Extraordinary to Queen Victoria, said in 1873 “The abdomen, the chest, and the brain will forever be shut from the intrusion of the wise and humane surgeon.”

*Charles Duell, a commissioner at the U.S. Patent Office, said in 1899 “Everything that can be invented has been invented.”

*Marshal Ferdinand Foch, who headed the Allied war effort in the Great War said “Aeroplanes are interesting toys but of no military value.”

*In the same vein, the famous Lord Kelvin had previously said in 1895 “Heavier-than-air flying machines are impossible.”

*Speaking of airplanes, a Yale University Management professor’s response to a paper by Fred Smith, who would found Federal Express, when Smith laid out his plan for a class project: “The concept is interesting and well-formed, but in order to earn better than a ‘C’ the idea mst be feasible.”

*And while we’re on the subject of professors who had it wrong, Irving Fisher (who at least put his money where his mouth was by investing heavily in the stock market) said in 1929 that “Stocks have reached what looks like a permanent high plateau.”

*Likewise, an internal memo from Western Union in 1876 said of the telephone, “This ‘telephone’ has too many shortcomings to be seriously considered as a means of communication.” Wait, my phone is ringing . . . .

Of course, there are many, many more, including several predictions that the car would never be influential as a means of travel. Oh well, ya can’t get them all.