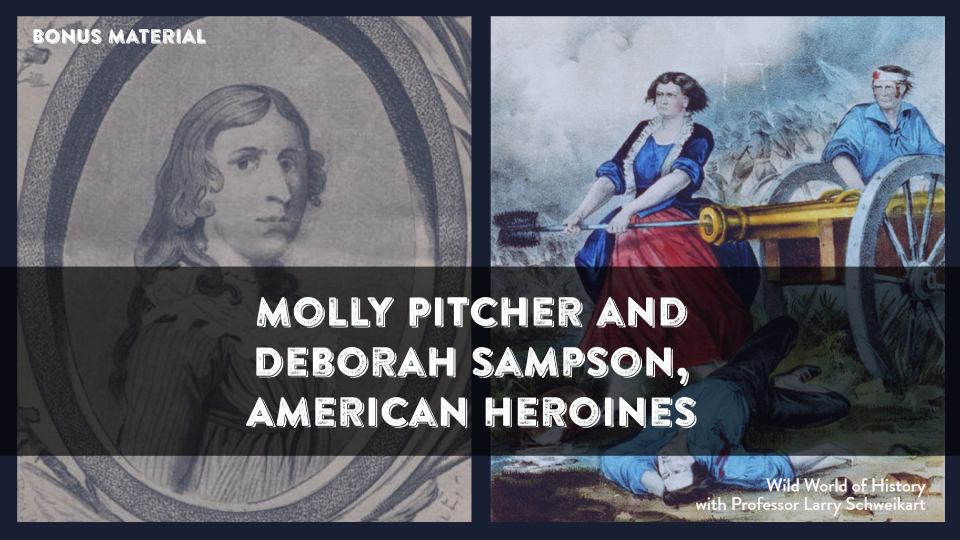 Many people know of the legend of Molly Pitcher, who helped load cannons at the Battle of Monmouth during the Revolution. Her real name was Mary Ludwig Hays McCauley. Her husband William Hays had enlisted in the Pennsylvania Artillery in 1777 and Molly joined him at Valley Forge—one of a group of women, along with Martha Washington, who cared for the sick and handled other camp duties, such as washing clothes. But she also carried water to the artillerymen who were training (water being used in ramrods to clean the cannon barrels between shots).

At the Battle of Monmouth in 1778, William Hays was at his usual gunnery spot when he either was wounded, collapsed, or was killed (the details are not certain) and Mary, who had been carrying water pails, took his place swabbing and loading the gun. When George Washington heard about the feat, he issued a warrant for Mary Hayes to be a non-commissioned officer, giving her the nickname “Sergeant Molly” for the remainder of her life. Her grave in Carlisle, Pennsylvania, is marked by a statue of a woman with a cannon ramrod.

However, fewer people know of Deborah Sampson. The War for American Independence been raging for six years, and Sampson intended to join the fight. Although most women worked at home, in the hospitals, or in other support roles, in 1781 Sampson made herself a man’s suit of clothes, trekked to a recruiting post, and enlisted under the alias of Robert Shurtleff as a private soldier in the 4th. Massachusetts Regiment! Sampson served her regiment at the strategic military post of West Point and kept her true identity secret by what one historian has called “artful concealment of her sex.” Her fellow soldiers simply thought young “Robert Shurtleff” to be a young whiskerless lad in his teens!

United States military records show that Deborah became a seasoned combat veteran. She was wounded twice in raids along the Hudson, and in a skirmish near Tarrytown she suffered a sword cut to the head. At East Chester she took a bullet in her thigh that left her a permanent scar and painful injury and a permanent scar. Amazingly, Sampson cared for her own wounds in order to prevent detection of her sex. Deborah Sampson’s true identity was not discovered until 1782. When serving as a general’s orderly near Philadelphia, she became sick with a severe fever and lost consciousness. The attending doctor soon learned that the infantryman under his care was actually a female.

Sampson received an honorable discharge from the army in 1782, and soon after married a young farmer, Benjamin G. Gannet. She bore and raised three children before re-donning her army uniform in the 1790’s to become America’s “first woman lecturer.” At a time when it was extremely unusual for a woman to speak before a mixed (male and female) audience, Deborah Sampson traversed early national America and told of her adventures as a woman soldier in the War for American Independence.

Both Hays (“Molly Pitcher”) and Sampson were genuine American heroines.