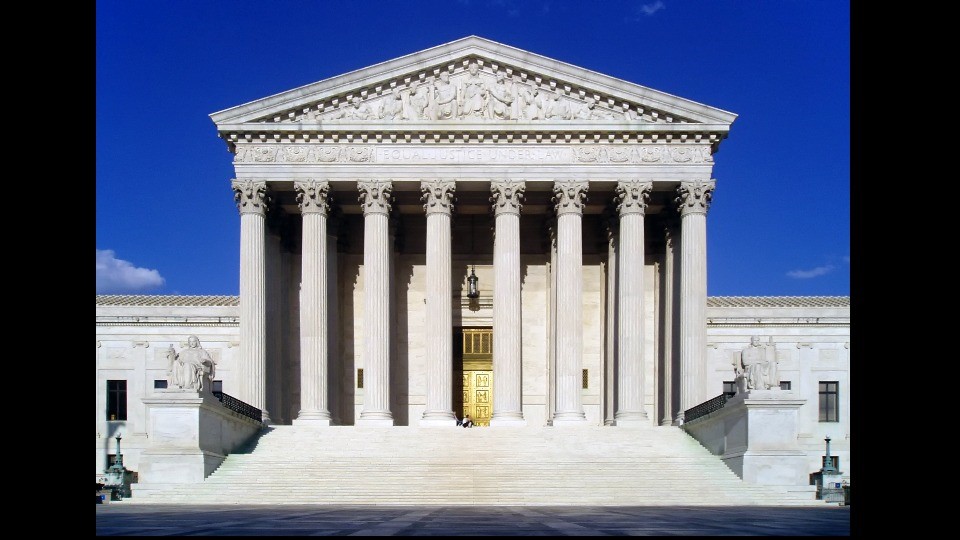 In previous lessons we have seen that the Pilgrims’ arrival established an exceptional nation because they brought three of the key ingredients for success—three of the “Four Pillars of American Exceptionalism.” As the young Republic grew, it took more than just the Constitution to ensure continued stability and success: it required a justice system that interpreted and translated the Founders’ intentions into reality.

In previous lessons we have seen that the Pilgrims’ arrival established an exceptional nation because they brought three of the key ingredients for success—three of the “Four Pillars of American Exceptionalism.” As the young Republic grew, it took more than just the Constitution to ensure continued stability and success: it required a justice system that interpreted and translated the Founders’ intentions into reality.

Key to this interpretation of the laws was the United States Supreme Court under one of the “Midnight Judges” appointed by John Adams as he was leaving office, John Marshall. Marshall, named Chief Justice of the U.S. Supreme Court, would shape American business almost as much as Robert Fulton, “Commodore” Vanderbilt, or Andrew Carnegie, for his court would construct a framework for American business that, for the most part, survives to this day.

In the 1803 decision Marbury v. Madison, Marshall’s court established the principle of “judicial review,” in which the Supreme Court could review laws to see if they aligned with the Constitution. As John Adams was leaving office, in an effort to thwart the incoming administration of his foe, Thomas Jefferson, Adams appointed a number of judges, staying up “until midnight” to do so. These were known as the “midnight judges,” and one of them was William Marbury. The commissions were approved by the Senate, but when new president Thomas Jefferson was inaugurated, he ordered his Secretary of State, James Madison, not to deliver the commissions because they had not arrived in a timely manner. Marbury sued Madison to obtain his commission.

The United States Supreme Court, under Marshall, ruled that the refusal to deliver Marbury’s commission was illegal, but the Court did not demand Madison deliver the commission because the law under which the commissions were issued was a violation of the Constitution. Ironically, Marshall’s decision said that Congress had given the U.S. Supreme Court a power it did not have! He essentially said that Congress could not give the Court the power to violate the Constitution—and in doing so, he thereby expanded the Court’s power immensely!

Later, in 1810 decision Fletcher v. Peck, Marshall’s court ruled that a state law was unconstitutional, extending the authority of the Supreme Court to state laws. In the process, however, the Court began a series of decisions upholding the sanctity of contracts. (Georgia claimed possession of the “Yazoo” lands and in 1795 divided the area into four tracts which it sold to four different development companies. Later, however, it was discovered the Yazoo Land Act was passed only by bribing the legislators and the law was repealed. Robert Fletcher and John Peck were both speculators in Yazoo. Fletcher bought land from Peck while the 1795 act was still valid, but in 1803 sued Peck because Fletcher claimed Peck did not have clear title to the land at the time he sold it. (Remember our discussions of “private property with written titles and deeds”?) The Supreme Court ruled that, regardless of how the law was passed, the repeal was unconstitutional because it was a contract.

In 1819, Marshall’s case affirmed contracts even further with the Dartmouth College case. In this case, Dartmouth College, a private corporation that had received a charter from King George III in 1769, but in 1816 the New Hampshire legislature, in an effort to reinstate the deposed president of the college, attempted to alter the charter and giving the authority to appoint positions to the College in the hands of the New Hampshire governor. The Supreme Court ruled that Dartmouth’s original charter was a contract that could not be invalidated by New Hampshire.

In 1837, after Marshall was gone, the Supreme Court added another “C” to contracts, “Competition.” A bridge company, the Charles River Bridge Company, had a charter (a contract) to carry people and freight over the Charles River for a fee. But a rival, the Warren Bridge Company, built a nearby bridge that would challenge CRB’s business. Claiming Warren violated the monopoly status implied in its charter, CRB sued. The Court ruled that while CRB’s charter was a contract, charters did not necessarily grant a monopoly, and only did so if the monopoly status was spelled out. Otherwise, CRB’s charter was only a grant to do business. The “C” of competition was added to the American business framework.

Two years later, in 1839,in The Bank of Augusta v. Earle, established the principle of “Comity.” The Bank of Augusta in Georgia had notes from Alabama banks that the Alabama banks argued they didn’t have to pay . . . because they were not in Georgia and were not subject to Georgia laws. The Supreme Court ruled that while states have rights over their domestic businesses, unless they specify by law what their laws were, it must be assumed that all states must operate on the principle of comity, in which each state respects other states’ laws. For example, if you are married in Arizona, you are still married in Michigan when you go there. If you get divorced in Nevada, your divorce is legal in Florida. The third “C” ensured that businesses had a certain level of stability and order when operating between states.

The “three Cs” ensured that America observed the sanctity of contracts, the emphasis on competition, and the order of comity. It was a foundation that would allow American businesses to soar over the next 75 years.

You need anVIP Membershipto get access to The 1620 Default: Chapter 6

We have emailed instructions to access The 1620 Default: Chapter 6 to . Make sure the email arrives in your inbox: either add "support@wildworldofhistory.com" as a safe sender to your email platform, or if you use Gmail, drag our email into your Primary tab.