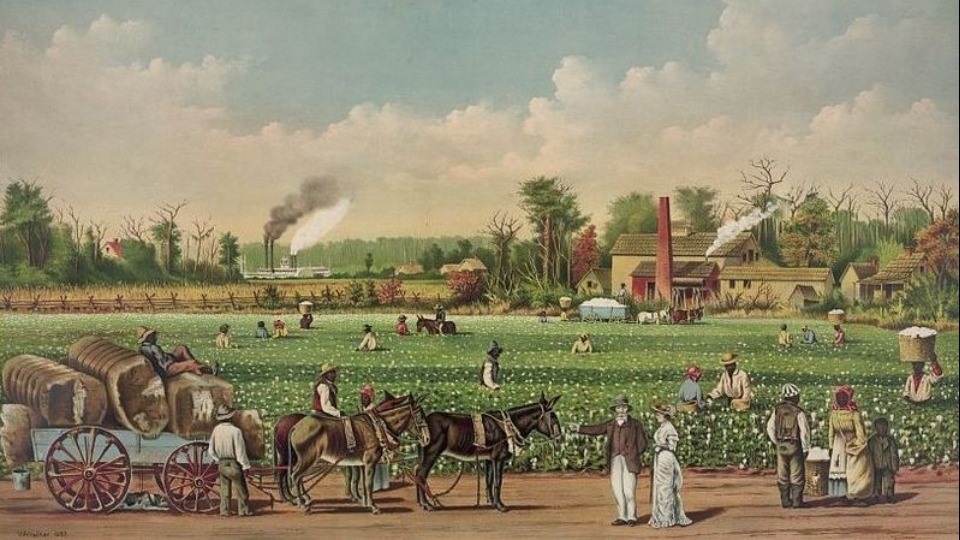 This is the first of several explorations into the arrival of slavery into America. Keep in mind that the entire premise of the New York Times’s series “The 1619 Project” (which already appears to have totally fizzled) was to tied slavery to the American founding and argue that all American Exceptionalism was tainted by slavery.

This is the first of several explorations into the arrival of slavery into America. Keep in mind that the entire premise of the New York Times’s series “The 1619 Project” (which already appears to have totally fizzled) was to tied slavery to the American founding and argue that all American Exceptionalism was tainted by slavery. As I have shown here, American Exceptionalism—as seen in the “Four Pillars”—did not come from Jamestown or Virginia, but form Plymouth and the Puritans, because they and only they arrived with common law (the Mayflower Compact that had the people choose the governor) and a Protestant religious tradition (bottom up, vs. the Jamestown Anglican top-down tradition). Both developed a sense of private property with written titles and deeds and eventually all of America adopted capitalism or free markets. But it was Plymouth that had all four: hence, American Exceptionalism starts there.

So where does slavery come in? The first cash crop in Virginia was tobacco. By cash crop, I mean a crop you raise almost entirely for sale to others, rather than consuming yourself (like, say, corn or wheat). Tobacco required two things to make a successful crop: a lot of land, and cheap labor. It was, after all, usually impossible for a man even with a large family to cultivate and harvest a large tobacco crop alone.

Interestingly, the Virginia Company (also known as the London Company) thought at first that merely having more people in the colony would help address this. To attract people to Virginia, the Company offered “headright,” whereby a settler who agreed to come to Virginia would be awarded anywhere from an acre to 1,000 acres (common headrights were 100 acres per person or 250 acres per family). To put that in perspective, it was assumed that a man and his family could sustain themselves on about 50 acres. The means by which the Virginia Company thought to expand the labor pool was that for those already living in America, they would be given 50 additional acres every time they paid for an individual to come to America, and those farmers would therefore impose “indentured servitude” on the new immigrants in the form of a contract before they left England. The governor or a county court would then provide a title deed after a survey.  The headright itself could be sold to others, or passed down through the family.

An “indenture” was a contract between the land owner and a free person in England (or a prisoner) to agree to work the land for a certain period of years in return for passage to the New World. After the “indenture” (or time of service) was up—in theory—the new immigrant was a free man. However, contrary to some of those seeking to debunk what they call the “Irish slave myth,” in fact some indentures were extended indefinitely and for almost any reason. Once an indenture was in possession of his master, his indenture could be extended for resistance, attempting to escape, or almost any other reason. Indentures were quite valuable, as is seen in existing posters for rewards for Irish indentures.

What is known is that there were tens of thousands of Irish indentures shipped to the New World in horrid conditions. At least 10,000 sent to the New World were prisoners. There were also many non-Irish “waifs” or white children swept off the streets of London or other cities to fulfill indentures. One study estimated that there were almost 80,000 mostly Irish white indentures working on sugar plantations in the West Indies. It is also clear that early law books and records interchangeably used the words “slave” and “indentured servant.” British records used the term “indentured servant” for both actual indentures and those taken captive as slaves.

However, Irish and European indentures to America were not slaves in the same sense that Africans were slaves—in most cases. African children were assumed to be slaves from birth after about the 1660s. In some cases, African slaves were branded, while indentures almost never were. The record in Virginia, however, is quite cloudy. As historian Edmund Morgan, in American Slavery, American Freedom noted, Americans wanted to be free, and it was a painful challenge for them to change their laws to accommodate their need for labor. Only slowly—over about a 50 year period in Virginia—were laws developed that made slavery hereditary and permanent. Even then, Virginia had manumission laws where slaves (if they were paid, as some were) could buy their freedom. Virtually all northern states developed such laws.

Nor were black slaves always slaves for life: we have records of free blacks in various colonies, including some former slaves. There is even a record of one free black who owned other black slaves. By 1860, about 1% of all slaveowners in the South were black. But it is clear that by the late 1600s African slavery had supplanted white indentures as the major form of labor on cash-crop plantations. There was a practical element: a black who escaped was more easily identified than a white who could blend into the population; most blacks did not know the language, and over time Africans from different tribes were deliberately mixed to confuse communications (and stem rebellion) even more.

The point is, the first two attempts at solving Virginia’s labor problems—headright and indentures—both proved too expensive for planters. This in itself constituted a bigger problem down the road, as there was a feedback loop in American history caused by the widespread availability of land (thanks to private property rights with written titles and deeds). Any person working on another’s farm had to be paid high wages. If not, he would simply leave, “go West,” and start his own farm. The startup costs were virtually free—seed, weapons for self-defense, and a lot of labor. Thus, wages in America from the outset tended to be high. (Too high in the case of planters.) High wages bring an effort on the part of producers to substitute capital for wages, that is, to create machinery that can do the job of humans. This was seen in the 1700s with the invention of the cotton gin by Eli Whitney, or in the mid-1800s with the invention of the reaper by Cyrus McCormick. But complex machinery requires more highly skilled employees to run and repair the machines, and those skills cause wages to go higher. Thus, the cycle starts all over again with producers and owners looking to substitute machinery for labor. A high, and constantly rising wage, is built in.

This is all due to the availability of land with written titles and deeds.

Consider the alternative system, which existed in England: land was scarce (that is, land that ordinary people could actually own and farm). With land scarcity, labor was cheap, and with cheap labor, owners and producers had no (or little) incentive to invest in more productive machines. Adding more people was cheaper. So wages continued to stay low. This was what economist David Ricardo called the “Iron Law of Wages”—except it only applied in systems where there was no availability of land with private property rights and written titles and deeds.

So back to slavery in America: when a class of people was brought in who legally and structurally (lack of language, easy to identify and recapture if they ran away) were cheap labor, they would be substituted for investing in more expensive machines. Their wages weren’t just cheap—slaves were almost free in that the only costs to the owners were clothing, food, and shelter. For this reason, the South remained “backward” in terms of inventions, investment, and technology. It was more expensive than to simply buy more slaves.

In another lesson, we will examine how this economic reality changed over a century to become a social and political reality as well, namely that a large class of slaves was not only needed but essential to the functioning of Southern society.

You need anVIP Membershipto get access to The 1620 Default Chapter 7: Land, Labor, and Slaves

to access
The 1620 Default Chapter 7: Land, Labor, and Slaves

to access
The 1620 Default Chapter 7: Land, Labor, and Slaves

We have emailed instructions to access The 1620 Default Chapter 7: Land, Labor, and Slaves to . Make sure the email arrives in your inbox: either add "support@wildworldofhistory.com" as a safe sender to your email platform, or if you use Gmail, drag our email into your Primary tab.