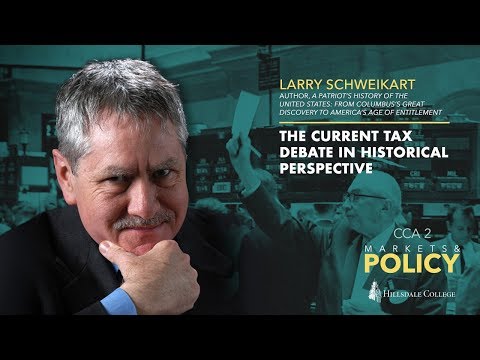 I presented to a great group of patriots at Hillsdale College about the tax debate and helped to put it into historical perspective.

Ever since the beginning of taxation, Americans have debated how taxes should be levied. Professor Larry puts all of this into perspective.

- Tonight I have the pleasure of introducing Dr. Larry Schweikart. Larry Schweikart is a historian, author and television producer. He received his BA and MA from Arizona State University and his PhD from the University of California, Santa Barbara. From 1985 to 2016, Dr. Schweikart taught history at the University of Dayton. His articles have appeared in numerous academic journals including Business History Review, Journal of Southern History and the Journal of Economic History. His PBS documentary, Rocking the Wall, considered Rock music's role in bringing down the Berlin Wall. He is co-author with Mike Allen of A Patriot's History of the United States and the author of several other books including Seven Events That Make, excuse, Made America America, 48 Liberal Lies About American History and How Trump Won, forthcoming in January 2018. Please join me in welcoming, Dr. Larry Schweikart.