The “Barbarism of the Times” 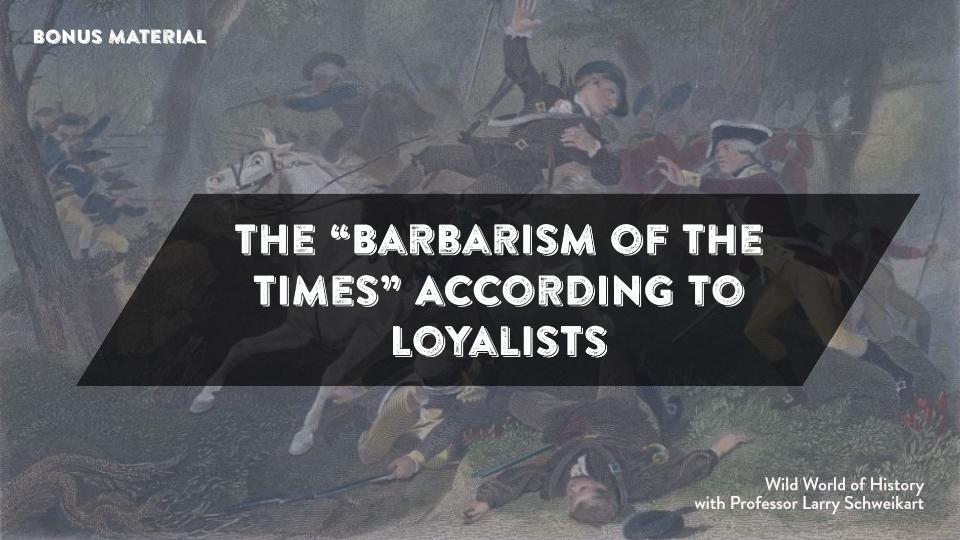 The “Barbarism of the Times”
Bonus Item filed in History of War and Peace , American History

Sociologist Seymour Martin Lipset once remarked that, after the Revolution, there were and never have been any true “conservatives” in America.

This view, which seems preposterous to modern readers, makes sense if one considers the 18th century context of the term “conservative” as a proponent of monarchy. Therefore, in 1783, the only Americans deserving the term “conservatives” (monarchists) were the Loyalists, and they were in the process of democratizing their viewpoints or packing their suitcases. Already, many Loyalists had fled the new nation, never to return.

Loyalists were the “status quo” element of American society in the 1770s: they did not agree wholeheartedly with British policy, but considered the Revolution too drastic and damaging an alternative. They professed obedience and loyalty to the King of England, earning them the sobriquet, “Tories” (or, worse, traitors). Most were well-to-do, on the upper fringes of society, and involvement in a failed revolution posed a risk to their wealth and position. They counted among their ranks royal officials, doctors, lawyers, and ministers, while others had engaged in shipping and commerce, often with close ties to England. Strong concentrations of Loyalists existed in New York and the Carolinas, especially in the coastal cities where trade flourished. To Jefferson, this alone raised suspicions (“They all live in cities,” he complained). Above all, the Tories were, in terms of personalities, the epitome of “conservative,” not wishing to risk sudden change. One Loyalist declared, “As long as government subsists, subjects owe an implicit obedience to the laws of the supreme power.” To do otherwise, would be to “plunge at once into anarchy.”

When war broke out, Tories joined the British military as militiamen, spies, saboteurs, counterfeiters, and even regular soldiers, in sizeable numbers. Cape Fear, North Carolina, fell in no small part due to the presence of Tories. A few had emerged as influential Loyalist leaders, including Joseph Galloway of Philadelphia, David Fanning of North Carolina, and South Carolinian Thomas Brown. “Lynching” originated when Patriot Colonel Charles Lynch of Virginia institutionalized the practice to quell the effects of such men. Their actions enraged and embittered American patriots, who craved revenge against those “coward [ly] servile, slavish, self-interested” traitors. When the revolutionaries finally gained the upper hand, the Loyalists bore the brunt of their hatred and animosity. Ostracized from society, prohibited from practicing their trades, disarmed, and even confined to their homes, Tories paid a heavy price for their political views (though hardly more than the signers of the Declaration had paid for theirs). Tories who refused to sign “loyalty oaths” were tarred and feathered, dunked in nearby lakes, hoisted on Liberty poles, or drafted into the Continental Army. But the most severe punishment was the denial of the most fundamental of all “rights of Englishmen,” property rights. Rebel governments did not permit Tories to vote or hold office. Colonies denied a free press to the Tories, and confiscated their land and possessions, which were never returned.

It is no wonder one Loyalist bitterly complained of “the licentiousness and barbarism of the times.”

Nor did the colonial governments allow Tories to practice their Anglican religion. Indeed, the war rapidly took on denominational overtones: Anglicans on George’s side, Congregationalists and Presbyterians on the side of the rebels. But even before Lexington and Concord, numbers alone worked against the Anglicans, and by 1780 they counted only 406 churches in the American colonies, compared to a combined Presbyterian/Congregationalist total of 1,244. Anglicanism’s demise—or, more appropriately, stunted growth—derived both from its lack of emotional appeal and its hierarchical structure. In that regard, even Presbyterians had trailed the Congregationalists in number, due to the popularity of self-governance, even in matters religious. King George III’s definition of the Revolution as a “Presbyterian Rebellion” showed that the Crown did not appreciate the depths to which concepts of self-governance had taken root in all facets of colonial society. Or, as historian Patricia Bonomi suggests, the Revolution was lost once the Anglican Church no longer commanded the obedience of the majority of Americans, and, quite naturally, Anglican leaders such as New York’s Charles Inglis to refer to the war as “causeless, unprovoked and unnatural.”

Unfortunately for the Loyalists such as Inglis, they chose the losing side. Their cause was doomed from the beginning because—based on their status quo world view—they were unprepared to fight. The end of the Revolution spelled disaster for the Loyalists, of whom some 8,000 left to join their brethren in Britain or Canada. To this day, Nova Scotia and New Brunswick are populated with the descendants of these American refugees. Some estimates place the exodus at 80,000, many of whom simply crossed the border, where they played a prominent role in Anglicizing French Canada. (The conditions of their arrival also explains the persistence of anti-Americanism to the present from people who ostensibly are “just like us.” In fact, however, from the 1780s on, Canadian opinions of the United States have been negatively shaped by this large, disaffected group of former Americans). This diaspora of Loyalists, however much under duress, represents the only time in American history where, on a large scale, more people left this nation than sought to enter it.

Hoping to cushion the blows to the Loyalists, the British government paid more than $50 million retribution to the Tories, but could not compensate for shattered lives and dim futures. Those who remained in the new United States and decided to tough it out eventually were assimilated back into the population, but it took several decades for the ill feelings to vanish. Though modern Americans would not have a clue as to which families were “pro-British” in the Revolution, the colonists who fought the War of Independence despised Loyalists well into the 1800s, and likely agreed with Washington’s sentiments: “One or two have done, what a great many ought to have done long ago, committed suicide . . . there never existed a more miserable set of Beings, than these wretched Creatures now are.”