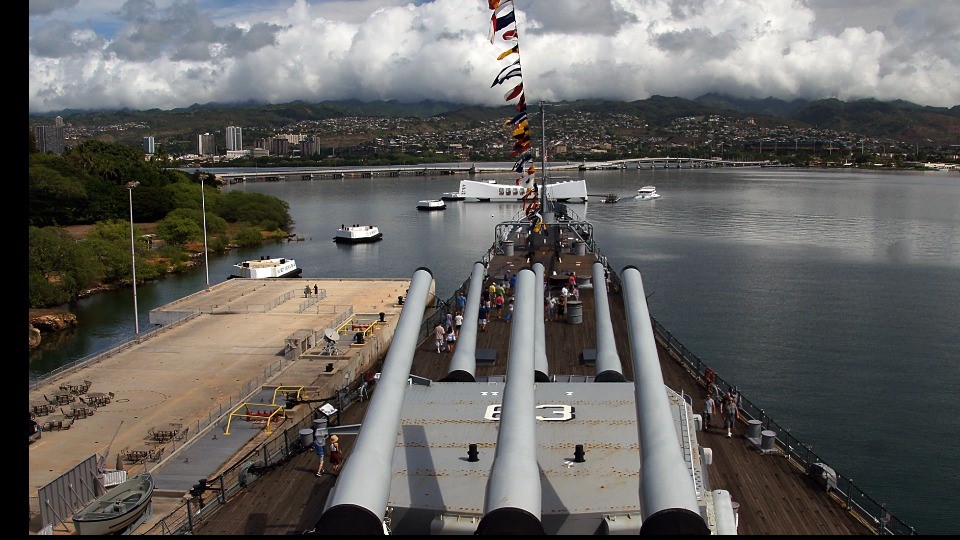 One last bit of incompetence led to the disaster. Because the Army Department & the Navy Department shared security duties at Pearl, they failed massively to coordinate. Neither the Army nor Navy had any long range reconnaissance out on the morning of Dec. 7.

One problem. He did not inform Gen George Marshall, the Chief of Staff. He did not inform anyone in D.C. or in Army command. When, on or around Dec. 1, 1941, Marshall sent a "war" message warning Pearl Harbor to be on "high" alert, he asked (by cable, if I recall) Short if he was on "level 1" alert, which to Marshall meant "high".  (I could have the order reversed, namely it could have been when Short arrived 3 was “high” and 1 “low,” but he reversed the level regardless).

Short said, yes, he was on level 1, which to him meant "low." Equally troublesome, on the night of Dec. 6-7, the Army & Navy had a tradeoff system receiving communications from DC. Personnel traded every hour, on the hour. Just as the "East Wind, Rain" message (generally considered by historians as the "this means war" message, though NO ONE knew if it meant war with the US or war with Great Britain), came into Pearl, the personnel was in the middle of a tradeoff.

The war message got buried for several hours. Finally dug out from the stack after considerable delay, it was forwarded to Washington "Attention: General Marshall." Realize this so far had nothing to do with the change in alert level status. Marshall's aide, who received the message in the middle of the night--around 2-3 am DC time--did not want to wake Marshall, who didn't see it for several hours.

One last bit of incompetence led to the disaster. Because the Army Department & the Navy Department shared security duties at Pearl, they failed massively to coordinate. Neither the Army nor Navy had any long range reconnaissance out on the morning of Dec. 7. Now, that said, even if they had, long range reconnaissance likely would have been directed eastward. With limited resources, it's doubtful Short or Adm. Kimmel would have had recon aircraft in a 180 degree grid.

This is important because the Japanese deliberately took a far northerly route to Pearl to avoid being seen by any commercial ships. Even a somewhat normal search grid probably would have missed them.

It is true that Pearl cryptographers had learned that one of several Japanese fleets were on the move. However, according to a classic article analyzing the cryptography, virtually all the analysts thought the "missing" fleet was headed toward Singapore.Henry Clausen and Bruce Lee did a terrific study of all of this called "Pearl Harbor: Final Judgment."

However, according to a classic article analyzing the cryptography, virtually all the analysts thought the "missing" fleet was headed toward Singapore. Henry Clausen and Bruce Lee did a terrific study of all of this called "Pearl Harbor: Final Judgment." It is important to understand that NEITHER was like reading the battlefield orders of General Robert E. Lee that were abandoned wrapped around cigars at Antietam (which George McClellan's staff found).

The Purple code was purely diplomatic material. JN-25b was only SOME of the Navy's transmissions. (Recall that the Kido Butai--Nagumo's carrier force at Pearl Harbor, operated under strict radio silence and had the transmission keys REMOVED in case anyone got any ideas about sending a message at sea!)

Commander Joe Rochefort, who had intercepted and read most of the JN-25 intercepts, told Adm. Nimitz that we were reading maybe 3% of the transmissions.

Realize also they were sent a) in code, which had to be broken; b) in Japanese, which had to be translated and then---it was only recently learned---the Japanese were blasting out massive levels of FAKE radio signals from Japan to confuse our analysts during this time. So even if a code was intercepted on, say, Dec 6, it had to be decrypted, translated, & analyzed the delays were astounding. In 1944 (!!!) we were still decrypting & analyzing codes intercepted in 1941 (!).

So back to Clausen: he was read into MAGIC. Guess what? NO ONE in those 5 congressional hearings was read into MAGIC, or, if they were they were not allowed to reveal it or allude to it in any way, either in questions or answers. Here it is 1945—and Marshall informs Clausen of MAGIC & goes so far as to GIVE HIM several actual MAGIC documents to carry on his person in a pouch on his chest! Clausen was to use these documents if there was ANY reluctance at all from those he was interviewing about giving him the answers he sought.

Oh, one other little thing: Clausen's pouch had an incendiary device that if Clausen's plane was shot down in a combat zone Clausen was to use these documents if there was ANY reluctance at all from those he was interviewing about giving him the answers he sought. Clausen concluded that a series of command-level goofs (the re-ordering of alerts, the change of guard in the communications office, the lack of aerial recon, and many more) led to the disaster at Pearl, and his report condemned Kimmel and Short.

Years later, a group of FDR haters would revive the "FDR knew" claims, but by then, JAPANESE archives were opened and disproved the whole nonsense. Japanese sources confirmed Clausen's investigation. The debrief of the officers in the IJN found they were so stunned by the degree of surprise they achieved that their anticipated losses---ONE THIRD OF THE KIDO BUTAI---were in fact a few dozen planes.

In fact, such a degree of success hurt the Japanese. Nagumo, who had after the fact thought about a third strike. (NOTE: A third strike was NOT in the original plans), nevertheless thought they had achieved such incredible success that he didn't want to risk the American carriers showing up. The Japanese had achieved a great success, but failed in their main goal of destroying the three American carriers that were based at Pearl. (One was taking planes to Wake Island, one was on maneuvers, and one was returning to the Pacific Coast). Nagumo also failed to destroy the oil storage facilities that was crucial.

Destruction of the oil facilities would have forced the US to operate out of San Francisco and San Diego, adding thousands of miles to the naval front in the Pacific.

One final note: Admiral Isoroku Yamamoto did NOT say "I fear we have awakened a sleeping giant and filled him with a terrible resolve." So Yamamura, the Japanese actor playing Yamamoto, said this in "Tora! Tora! Tora!" the 1971 movie about Pearl. But there is no record in Japanese sources that he said this. Yamamoto certainly BELIEVED it, though. He had gone to Harvard, lived in the US, crossed the country, even visited Dayton's Wright-Patterson AFB. He knew the Japanese were vastly overmatched and argued against war, so much that the IJN shipped him to sea for fear he might be assassinated by the Army if he stayed in Japan.

You need anVIP Membershipto get access to Thoughts on Pearl Harbor

We have emailed instructions to access Thoughts on Pearl Harbor to . Make sure the email arrives in your inbox: either add "support@wildworldofhistory.com" as a safe sender to your email platform, or if you use Gmail, drag our email into your Primary tab.