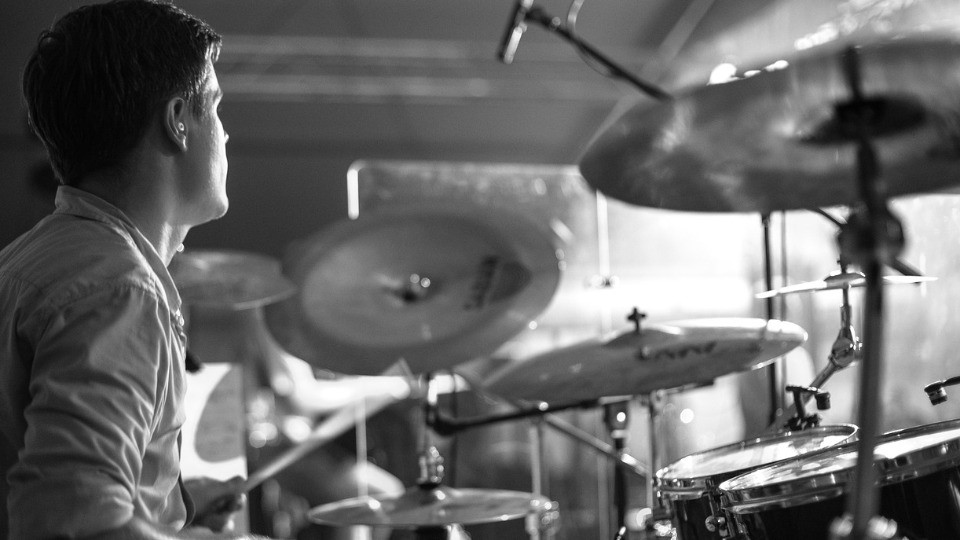 My top ten drummers of all time, in order (with an obvious bias toward rock, not jazz).

My top ten drummers of all time, in order (with an obvious bias toward rock, not jazz).

1) Ringo Starr. Yep. He is the godfather of rock drumming. Listen to any early Beatles album: he plays every beat imaginable--cha cha, waltz, Motown. Ringo was by far the most innovative drummer in a very long time. The secret to his "behind-the-beat" drumming wasn't meter, as often supposed, but was his LEFT-HANDEDNESS on a right hand setup, which caused him to be a half-second behind on everything. It's also why his rolls are so odd. Someone once said "Every great musician is the result of a handicap." Think Jimi Hendrix, playing a right-handed guitar restrung. Ringo's handicap gave him an unmatched sound. No, not a soloist and he detested solos. And technique-wise, no comparison to others.

2) Number 2 on my list is Carmine Appice of Vanilla Fudge, Cactus, many other bands. Appice to my knowledge is the only rock drummer ever to write a basic book on drumming; the only rock drummer ever to appear on ESPN's judging for the drum & bugle competition. Appice was one of the first to use a double-bass set with massive 26" bass drums. He would develop licks (cymbal choke off, innovative use of the high-hat, the upside down "China-bell" cymbal) and hang out in those licks until he explored every element.Then he would move on to a totally different sound. His best work was in the Fudge & the first three Cactus albums. Incredibly powerful drummer, good singer. Wrote a number of songs with Rod Stewart including "Do Ya Think I'm Sexy" & "Young Turks." he boy can still really play. Check out this clip from Kimmel: https://songfacts.com/blog/interview

3. Number 3 on my list is the just-deceased all-time monster, Ginger Baker. He always though of himself as a jazz drummer. Sorry, don't buy it. I've heard him play jazz---great, of course---but what he brought to "Cream" was absolutely revolutionary, using his snare & toms instead of the traditional high-hat to keep the beat. While far more likely than Appice to innovate new beats throughout his career, Baker nevertheless--like Ringo--brought in a whole new style to rock drumming.

Any kid wanting to play drums could stop with Ringo, Appice, and Baker.

4) My fourth greatest rock drummer is someone few mention: Prairie Prince of "The Tubes." Noted for his "flat-jack" single-headed drums, Prince likewise specialized in interesting beats and sounds, utilizing the whole drum set. Listen to his work on "Come as You Are," or "What Do You Want From Life?" Great sound, great technique, largely overlooked.

5) I would put Cozy Powell in the top five. Powell died in 1998 in a car accident; was a virtual twin to guitarist Jeff Beck; & was a powerhouse. Like the others, Powell constantly had new beats, but he was far simpler than Appice, Baker, or Prince. That does NOT mean he couldn't play his butt off. Anyone who could hang with Jeff Beck had to be top-notch.

6) At this point, I will put in the only jazz drummer in my list, Joe Morello (d. 2011). The long-time drummer for the Dave Brubeck Quartet, Morello--like Baker (better than the others, I think)--was a master at playing all time signatures.

Listen to him on "Maori Blues" or "Time Further Our" or virtually anything in 5/4, 7/4 and you'll see why he is a killer drummer.

I saw the Quartet around 1968 or 1969. Morello, with his big bottle-cap glasses, was in the middle of an impressive roll during his solo.

Suddenly, he lost a stick. It flew across the stage.

Morello's roll . . . DIDN'T CHANGE! In the middle of his roll, he took his free hand, lowered his glasses to look at the stick, calmly picked up another stick, & jumped back into the roll. You never knew he was playing with ONE HAND. Morello's foot (long before these "cheater" double pedals) was faster than Appice's or Baker's double basses!

7) Bob Henrit, who played on Russ Ballard's solo album and also, to my surprise, played on the 1965 one-hit-wonder "Concrete and Clay." VERY sparse and the exact opposite of Keith Moon (whom I despised as a drummer--perpetual fills with no point). As a young drummer, if you want to learn how to make a single beat--with almost no fills--be totally interesting, listen to Henrit.

8) Steve Brewster, another session musician most people never heard of, is awesome on his "Point of Grace" contributions, especially "God's Green Earth" and "Steady On." Superb use of cymbals (like Prairie Prince and Appice) & great beat variation.

9) Steve Smith, known for his work with "Journey," has been voted the #1 drummer 5 years in a row by "Modern Drummer" mag; is listed as one of the top 25 drummers of all time, and is in the Modern Drummer Hall of Fame.

He is another "sparse" drummer who doesn't need a lot of licks to prove he is great. He is especially adept at clever high-hat work in his "Journey" tracks. He is also another who views himself as a jazz drummer.

10) Finally, I guess I'm forced to include John Bonham. Honestly, not a big fan. I never found him particularly innovative, but no one can deny his power, especially in the studio. "Kashmir" is one of those songs whose drum sound is unforgettable.

11) A few honorable mentions would include Phil Collins (again, innovative sounds), Vinnie Colaiuta (who can play with anyone), Mitch Mitchell--who helped make Jimi Hendrix's sound and was by far his best drummer--and Gene Krupa (one of my early faves).

12) Several others--it's just me, just my taste--I never cared for: the aforementioned Keith Moon, Neil Pert, Buddy Rich ("let me play everything as fast as I possibly can"), and Louie Bellson (who should have done more by being the first to use a double-bass set).

After I did the list I realized I had left out two that should tie with Cozy Powell: Ian Paice of Deep Purple and Bill Gibson of Huey Lewis and the News—both vastly underrated drummers.

You need anVIP Membershipto get access to Top Ten Drummers

We have emailed instructions to access Top Ten Drummers to . Make sure the email arrives in your inbox: either add "support@wildworldofhistory.com" as a safe sender to your email platform, or if you use Gmail, drag our email into your Primary tab.