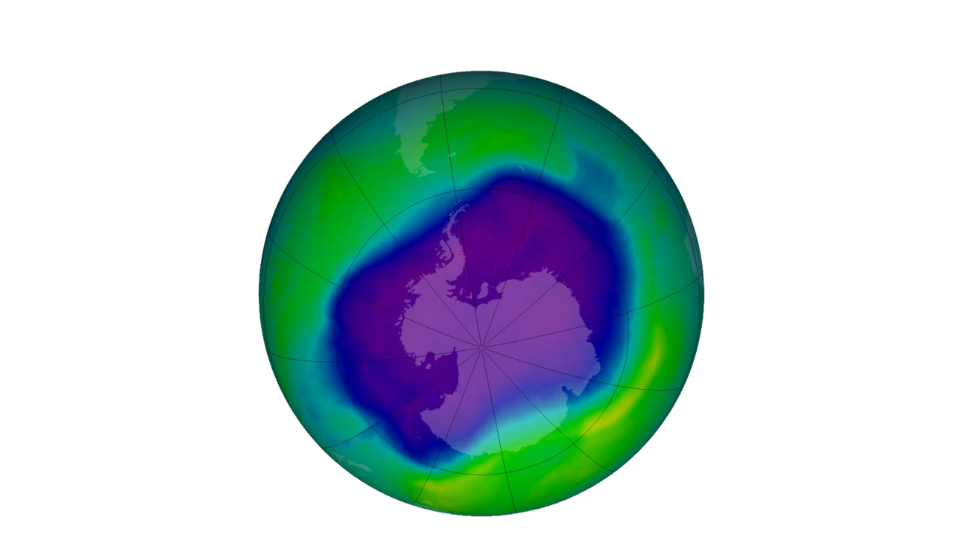 In the 1980s, “Global Warming” was not considered a thread. Quite the contrary, major magazines such as Time and Newsweek fretted about “global cooling” and a new “ice age” about to hit the earth. But another major concern of the day was the creation of holes in the ozone layer, largely caused by the (according to the so-called “experts”) release of flurocarbons from such things as aerosol deodorants.

In the 1980s, “Global Warming” was not considered a thread. Quite the contrary, major magazines such as Time and Newsweek fretted about “global cooling” and a new “ice age” about to hit the earth. But another major concern of the day was the creation of holes in the ozone layer, largely caused by the (according to the so-called “experts”) release of flurocarbons from such things as aerosol deodorants.

The issue was so strong at the time that even a conservative economist I knew got caught up in finding a solution for the “CFCs” as the flurocarbons were called. When President Ronald Reagan was asked by a reporter about losing the ozone layer, he—in commonsense fashion—asked, “Well, can’t we just put it back?” The press howled. How could a president be so stupid.

Except . . . he wasn’t. He asked precisely the right question.

In the late 1980s, I began work on a (at the time) secret program called the “National Aero-Space Plane,” or NASP. The technical designation for the program was the X-30. It was a “research and development” aircraft. It was intended to replace the Space Shuttle, which took months to re-fit, maintenance, refuel, then roll out (in scenes reminiscent of the Egyptian slave movies where blocks were being pulled to the Pyramids) of the Shuttle for its rocket launch. Instead, the X-30 was to fly into orbit using “airplane-like” horizontal takeoff and landing. It would fly through air—the atmosphere—until it reached a speed of over 18,000 mph (Mach 25) whereupon it would shoot up using momentum to put it into orbit. When it was time to return, the plane would use very small maneuvering rockets to head back to earth, landing like a regular aircraft. In theory, this would have saved substantial amounts of downtime and made, finally, “routine” space access possible.

To achieve this, the X-30 had to overcome five massive challenges:1) develop a scramjet engine (supersonic combustion ramjet) capable of attaining the necessary speeds; 2) use a new type of fuel (H2, or liquid slush hydrogen fuel); 3) have radically new tougher but lighter materials; 4) possess advanced avionics, and 5) make use of “computational fluid dynamics” or CFD. The latter was necessary due to the fact that there was no wind tunnel in the world capable of testing anything (let alone a whole airplane) at faster speeds than Mach 8. To test it, we had to build it. The scramjet acted like a giant funnel: after you reach Mach 4 or Mach 5 with another engine (a turboramjet) you could switch on the scramjet and the existing speed of the airplane would take over, forcing highly compressed air through the funnel into the combustion chamber. (Think of turning on a hose, then putting your thumb over the end of part of it). When it came to materials, the scramjet’s relative lack of power compared to rockets meant that the plane had to be far, far lighter than the Space Shuttle. That also meant no layers of tiles all over the body or wings. Instead, the program developed radical materials that sustained many times the heat of existing tile material, but were 1/10th the weight. And the need for advanced avionics came when you realized that a human would be trying to fly a vehicle going 18,000 miles per hour!

My job was to write a history of the program. I was assigned to the “Applications Directorate,” which meant I also was to deal with queries by the government for exactly how an X-30 would be used. Obviously the USAF had its intended purposes, as did NASA. But were their others (than military or exploration/research)? Well, we invited academic papers on other potential uses of the NASP, and lo and behold, one came in showing that the X-30 could be used to . . . put back the ozone layer.

The author showed scientifically that the emission from the X-30's H2 burning would be oxygen. If a device was installed right behind the exhaust, it could send a charge through the oxygen exhaust that would turn the oxygen into O3 . . . ozone. Yes, the paper showed, it was possible to replace the ozone layer.

The X-30 was never built. The program managed to perfect the H2—storing it, producing it, burning it—and the computational fluid dynamics proved extremely accurate. All actual tests performed pretty much as the computers showed they would. But while the program made astounding advances in materials, the new materials never got close to the weight or heat resistance needed for the aircraft traveling through the atmosphere at 18,000 mph. And the scramjet never got close to producing the kind of power needed at that time. So in 1995, the X-30 was terminated and the elements broken up into three different research programs—lifting bodies, fuel, and scramjet.

However, in the process, the research showed that Reagan was right. We could “just put it back.”