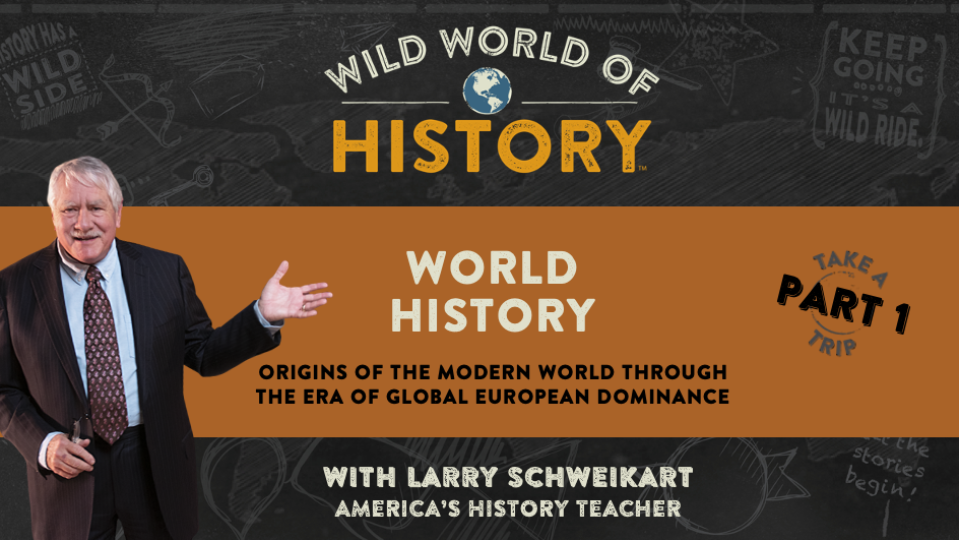 This course traces world history—Europe, Africa, Asia, Latin America, and the United States—from the pivotal year 1775 to the present in two roughly equally balanced halves. It incorporates the “Four Pillars” of American Exceptionalism, or, more accurately, the absence of these and the effects this absence had, on other parts of the world. It includes culture, politics, and economics of the major parts of the world.

This course traces World History since 1775 (including the American and French Revolutions) to the present. It incorporates a discussion of the “Four Pillars” of American exceptionalism and why these did not develop in other countries. Lessons address Europe, Russia, the Middle East, Latin America, China, and Africa as well as the United States.

*Teaching Guides with workbook answers for the parent or instructor

*Study guides/workbooks for the student

Included in the lessons are discussions of the origins of the modern world and their components of the scientific revolution, the notions of religious toleration, and of constraints on monarchs. Then we will examine the nature and character of the American Revolution, its influence on the French Revolution and how the two were different; the rise of Napoleon and how his conquests shaped not only Europe but Latin America and Africa in a way different from the development of the United States.

You’ll see how the Industrial Revolution in England, then America, then Europe set the Europeans and the Americans apart in their economic growth from much of the rest of the world. A unit on Africa, Asia, and India will explain how geographical hurdles retarded the growth of those regions.

Then, starting with the 1820s, we see the rise of democracies in Europe as monarchs slowly give way to more representative governments. Nevertheless, both France and Germany have difficulty establishing any kind of democratic government, and find themselves at war.

Finally, we will see how the Industrial Revolution gave the Europeans such an advantage when in conflict with Africans or Asians that it made the conquest of much of the world relatively easy for the Europeans. America finds itself a part of this expansion with the Philippines and Hawaii.

We have emailed instructions to access World History Since 1775 - Part 1 to . Make sure the email arrives in your inbox: either add "support@wildworldofhistory.com" as a safe sender to your email platform, or if you use Gmail, drag our email into your Primary tab.